For anyone who’s ever attended an ultimate frisbee tournament, one thing can be said – they all have a unique atmosphere. You don’t want to leave – ever! The opening day of European Youth Ultimate Championships in Wrocław is no different.

Photos out of courtesy of Klára Lipertová

The opening ceremony gathered all teams proudly presenting their national jerseys. The happiness and excitement of the first day were electrifying. Anyone who visited the Olympic Stadium today could see how happy and energized were these young athletes.

The opening game between Poland and Czech U20 presented us with a quite a spectacle. Both teams put their hearts into the game showed some skill. Even some senior players could envy them for such ease in making daring D’s! The game progressed with team Poland in an advantageous situation. For the majority of the game, they lead with a 4 to 5 point difference.

During the second half, the Czech had a breakthrough. From the steady catch up, they broke into quite a chase! Their game started to be more confident. With a few spectacular D’s and fast, thought through offensive points they almost caught up with Poland. The ending brought quite a few heart attack for the polish fans cheering at the Olympic Stadium. During the match, the other Czech divisions cheered for their team, which certainly paid off on the field! In the end, team Poland managed to score the 15th point which ended the opening game.

We’re looking forward to more daring games like this one in the upcoming days. The youth teams show so much skill, which is a great promise for the championships soon.

The broadcast of the games only at Fanseat.com

If you can’t be in Wrocław to watch how the teams fight their way towards the podium, check out Fanseat. The live broadcast is available for 9.99 euro per month. There’s also a pay-per-view option for 5.99 euro per game.

The selected matches for tomorrow live streams are:

It’s not only Ultimate and games

The team behind EYUC made sure to fill out players timetables between the games. This creativity knows no limits! You can attend workshops such as dream catchers, kajo drums, parkour, body drums and soap bubbles. In the mornings you can show up at Joga. You can attend the activities at the Chill Zone. Check out the whole schedule for more information. If you’re still wondering what’s going on at EYUC City check out our previous post.

Tomorrow the games start for good at 9 am. You can view the schedule for the games at Ultimate Central. The games will take place on 15 fields, so there’s a lot to look forward to!

I'm an Ultimate Frisbee player since 2015. Currently, I'm a player at Ultimatum Gdansk sports club and a blogger at Introverted Ultimate. I enjoy organizing tournaments and all kinds of events. I'm best described as a nerdy introvert. 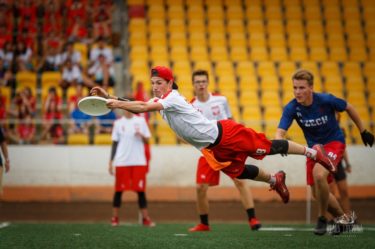